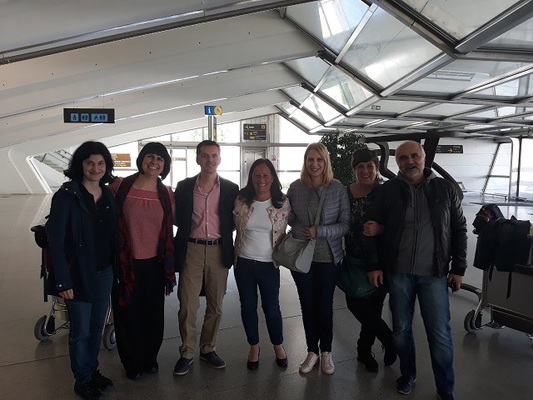 On Sunday 12th, we went to the airport to welcome our Greek partners, Dimitris from Periplo was also  with us.

Ms Katerina Koutroupa, Maria Dampratzidou, Ioanna Goula, Anna Persidou and Mr Iordanis Kyrailidis, Katerini teachers arrived at Elexalde high school at 9:00 o’clock, they were  introduced to the management team and met the headmaster who said a few words in Greek and Katerini teachers gave him the presents they brought for the School.

Then, they were welcome with an «aurresku» performed by some students who participated in Erasmus + project. It was also  very moving an at the same time the teachers learnt the meaning of aurresku. The aurresku is a Basque dance which is part of Basque heritage, so that has meant a brief approach to Basque cultural traditions and identity.

They  visited the high school and knew all the facilties of it folowing the head of studies’ explanations and met all the teachers of the different subjects.

The coordinator of the project Ms Gutierrez told them a few words, giving them a warm welcome and explaining that this mobility would strengthen the links between both countries and she also added that she hoped that their staying in our school and the Basque Country would unite both schools.

The English teacher Ms Anna Persidou also showed Greek teachers’ grattitude for the warm welcome and also insisted on keeping a future relationship between both schools.

Then, we had a lunch with the School Staff where Elexalde teachers met Katerini teachers and exchanged information about both schools and both countries, all the differences and common points about the two schools’ system  of education was shared.

After lunch we started our training . We had a look at the programme we would follow in these days. We started with a brief approach to Galdakao and the Basque country; Teachers watched a video about Galdakao, Bilbo and the Basque Country.

We also explained to them our system of education and disscussed about the differences and common things about both countries.

Then, we analysed the assessment and type of tools which would be  used  in our project.

We made a copy of our February report and read it. We agreed that there would be another  two reports. One at the end of the project this year and the other next year before the final one.

We made a copy of our February report and read it. We agreed that there would be another  two reports. One at the end of the project this year and the other next year before the final one.

That day we considered very important to show Katerini teachers our historical and architectural heritage as we were working it in our project and we understood that the knowledge of it would help transmit it to the Greek students and as we had said before, we were talking about contents of the project which would ease the understanding of the ativities.

Moreover, our project means discovering our heritage and sharing it with the Greek school, so what better than visiting it.

We stopped in Bakio and we explained to them the importance of this summer resort with surfing and the characteristics of the Basque coast.

We were characters of Game of Thrones and we climbed the 241 steps to the top and as it is a tradition we thought a wish and tolled the bell three times.

This idyllic place was located between the coastal towns of Bakio and Bermeo. It was the scenery of pirates, covens and legends. At the top of it, there is a view of Bay of Biscay.

Then we visited Mundaka, Urdaibai which is our natural heritage and our students would work and share it with Katerini students. Urdaibai is a natural setting of outstanding beauty and diversity, which is listed by Unesco as a Biosphere Reserve in 1984.

It was a very interesting visit.

In the afternoon, we arrived in Gernika and learnt the history of this town, the meaning of Gernika tree and the importance of it in the Basque people´s lives.

After our trip we edited this video with a summary of the two days of our training .

Before continuing with the assessment training, we visited Andra Mari church, Galdakao’s historical and architectural heritage. This church dates from XIII century. It belongs to the Middle Ages, its style is a mixture of romanesque-gothic and it is opposite our school. The students would work it during the project. They shared our town’s heritage with Greek students.

Andra Mari’s altarpiece is plateresque style and a woodcarving  of Santa Maria (XIII century) can be found.
All of us enjoyed this marvellous church.

We came back to work and we continued with the training related to assessment. We analysed the different tools such as Socrative, rubrics, cultural tests, questionnaries  and kahoot. We saw all the different tools we  carried out until then and the activities which had to be done.

And to practise all the training done until then what better than a kahoot about what we had learnt in this training.!!

We stopped for a little so that students could get to know the Greek teachers and talk with them. They made them a lot of questions about the project and the activities they liked the best. They also asked them if they would like to visit Greece. They showed them all the work they had done so far.

Students  also danced a traditional Greek dance for them and Greek teachers  accompained them. Then students danced «zazpi jauzi» which is the dance students have to dance in the students’ mobilities .

This is a video about all the conversations that Greek teachers had with Elexalde students.

All the students danced zazpi jauzi, the Basque dance of the project that Greek students learnt and our students also danced the Greek dance Omar with the Greek teachers.

So at the end of the day, we  had lunch in a txoko, a typical Basque gastronomy society . Not only did the Greek teachers taste the Basque cuisine which was also  worked in our project but they  also cooked some of it. There is a section of all the recipes students have cooked with their families on  this blog, where we have encoraged Greek teachers to cook them .

Our menu was cod salad, squids in its ink, cod pil pil  and flan . All delicious!!

As I have said before, Ms Anna Persidou helped our chef Jesus de Blas, a teacher of Elexalde High School with the «pil pil» sauce.

They all had a wonderful time all together .

A video which summarises all  Wednesday, from the visit to Andra Mari Church to the talk of the Greek teachers with our students , our training and the lunch at the «txoko»

Today training was about dissemination. The project had to be disseminated at the beginning, in the middle and at the end of the project launch.

We  also looked at the dissemination we had carried out until now. Both schools  appeared on newspapers and even television ( the Greek one) .

We  also focused our attention on the dissemination at school and the community.

We started our dissemination in the town, visiting the mayor of Galdakao.

The mayor welcame the Greek team. The Greek teachers  introduced themselves and talked about the common things between both countries.

The coordinator of the project Mrs Gemma Gutierrez  explained the project in detail and showed a big interested in it and  agreed to colaborate with it.

We appeared on the webpage of the town hall.

Here the link where the new can be read.

In the morning we were training about how to organise the open days and the possible activities we could organise in the students´mobilities.

We decided to do it in June and explained to parents all the activities we had done.

We  also examinated the two platforms of the project, mobility tool and the platform of results.

Each school gave differrent ideas about the organisation of both mobilities .

Then the Greek students  said farewell to Elexalde teachers and Management team.

It was a vey fruitful training meeting which enriched the project. We  agreed  and discussed  a lot of points related to the training organised and we  also opened different ways of dissemination and assessment .